When are we open?

Teeming with wildlife, wonderful natural scenery and remarkable cultures, East & Southern Africa is the most popular part of Africa for overlanders. Our overland trips to Africa get you off the beaten track, and while you’ll get to see all the highlights, you’ll also take the time to travel slowly through the real country, lingering among beautiful scenery and spending time with the locals. There’s no better way to see East & Southern Africa than by travelling overland.

Take a look at our list of life-changing experiences you shouldn’t miss when you visit.

There’s no denying that East and Southern Africa is the best place in the world for a wildlife safari. These regions are home to some of the world’s greatest National Parks and Game Reserves, including Maasai Mara, South Luangwa, Ngorongoro, Queen Elizabeth, and the iconic Serengeti National Park. Here you’ll meet giraffes, elephants, cheetahs, zebra, hippos, wildebeest, lions, and countless other species.

Zimbabwe’s Matobo National Park boasts some one of the most majestic landscapes in the world, littered with balancing rocks, one on top of another, known as kopjes – but it’s perhaps most renowned for its large populations of white and black rhinoceros. These were introduced in two waves – the white brought here from Kwa-Zulu Natal in the 1960s, and the black from the Zambezi Valley in the 1990s. It’s exhilarating to track the rhinos on foot and with the help of an experienced guide, following clues such as tracks and droppings, before finally catching sight of these wonderful animals in the wild.

The Volcanoes National Park in Rwanda and the nearby Bwindi Impenetrable National Park in Uganda are the last remaining refuges of the mighty mountain gorilla. Although population numbers have increased over recent years, there are still only a little over 1,000 left in the world, so these wonderful animals are still Critically Endangered. Trekking out into these parks is the experience of a lifetime – the pungent aromas of wet mountain vegetation will fill your senses as local trackers guide you through the lush forest, until you finally come face to face with a group of gorillas. Observing a baby gorilla or a great Silverback in such close proximity can be a very moving experience.

On the night before our trek, we’ll camp up in the mountains close to the gorilla habitat. 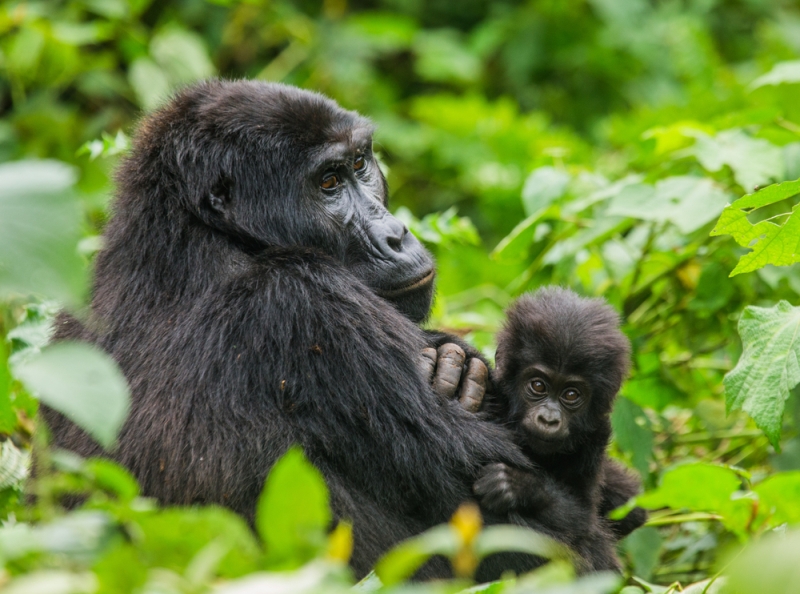 The tallest mountain in Africa and the so-called ‘roof of Africa’, Mount Kilimanjaro and its snow-capped peak dominate the skyline of Kilimanjaro National Park. Although it’s a non-technical hike, the mountain’s climate, elevation and altitude make reaching the top no mean feat – but with the right preparation, equipment and guidance, you’ll be fine. 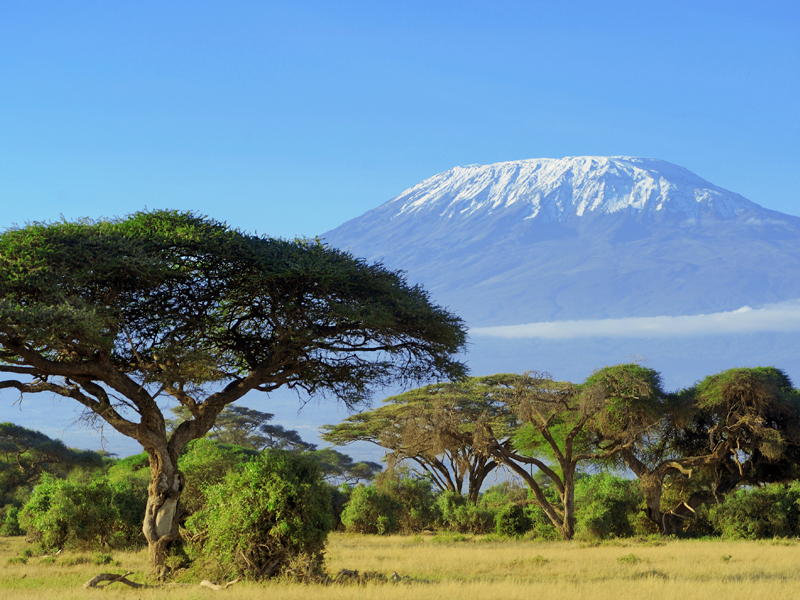 The atmospheric spice-scented streets of Zanzibar’s Stone Town are a delight to wonder among on foot, exploring its bazaars, shops, mosques, palaces, courtyards, and its tangle of narrow streets. Designated a UNESCO World Heritage Site in 2000, Stone Town has a rich cultural heritage and beautiful architecture combining elements of Arab, Persian, Indian and European influence.

Every evening at sunset, Stone Town’s famous night market opens up at Forodhani Gardens, with food stalls aplenty serving up a range of seafood, barbecued meats, and the famous Zanzibar pizza. Why not visit with your group and try haggling for your supper?

Spend the night with Samburu villagers

The Samburu are a semi-nomadic people who live in the Rift Valley province of northern Kenya – a dry, relatively barren land, which means the Samburu have to relocate every 5 to 6 weeks for fresh grazing grounds for their livestock. The Samburu are closely related to the Maasai, but have stuck more keenly to their ancient traditions, which makes them a fascinating tribe to spend some time with.

We spend the night in the Samburu village while travelling through Kenya, watching traditional Samburu dancing and learning about Samburu tribal life and customs.

Go white water rafting on the Nile at Jinja

The town of Jinja in Uganda is the adventure capital of East Africa. Here you’ll find fantastic opportunities for kayaking, mountain biking and horse-riding, as well as one of the world’s most spectacular white-water rafting destinations: the source of the River Nile. There are activity options for all experience levels, but whichever you choose you can be sure of a hair-raising ride.

Marvel at the magnificent Victoria Falls

Often called the largest waterfall in the world, Victoria Falls is one of the most spectacular sights in Africa, comprising a curtain of water around a mile wide and over 100 metres high. The locals call the falls ‘Mosi oa Tunya’, or ‘the smoke that thunders’ – and aptly so, since they can be heard from a distance of 40km, and the spray they create rises to a height of more than 400m and can be seen from a distance of 50km.

We have a number of optional activities available at Victoria Falls, including sunset cruises on the Zambezi, white-water rafting, horse-riding, bungee-jumping from the bridge over the Second Gorge, and an incredible helicopter flight allowing you to see the waterfalls from above.

Another of Africa’s great natural wonders is Namibia’s Fish River Canyon, believed to be the world’s second largest canyon after a certain well-known landmark in the US. But at more than 150kms long, up to 27km in width, and up to 550m deep, it doesn’t matter where it ranks – all that matters is the unforgettable sense of awe this colossal canyon inspires.

Needless to say, there are remarkable photo opportunities here, and on our overland trips we watch the sun set over the canyon before camping for the night.

Canoe on the Okavango Delta

Drifting in a mokoro along the labyrinthine waterways that make up Botswana’s Okavango Delta is one of the most serene experiences on offer in Africa. Like an African gondola, the mokoro is punted peacefully through the Delta by an expert local driver with a long pole, the silence only shattered by the occasional deep grunting of hippos and other animal sounds.

When we visit the Okavango Delta, we’ll camp on an island in the middle of a wilderness area on the first night, followed by a second night spent on a houseboat in the heart of the Delta. 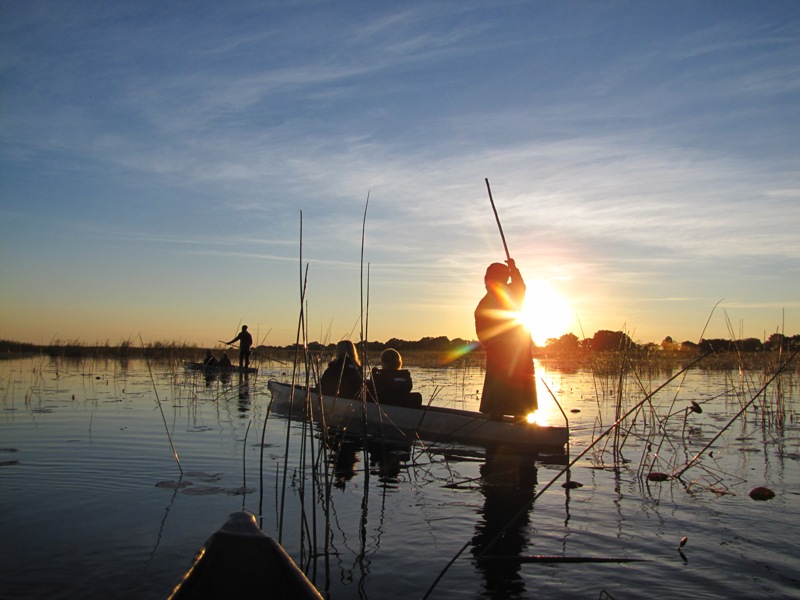 Watch the sunrise from atop Dune 45

The Namib Desert is most famous for its vast dune fields, the most spectacular of which are found at Sossusvlei in the Namib-Naukluft National Park. These sand dunes reach heights of as much as 325m, and, as one of the world’s oldest and driest ecosystems, are home to a plethora of wildlife such as the ever-graceful oryx. In order to fully appreciate the glory of the area, you’ll need to climb its most famous dune, Dune 45, in time for sunrise.

Contact our experienced sales team today at info@dragoman.co.uk or +44 (0)1728 861 133 to plan your overland adventure to East & Southern Africa.