When are we open?

Dragoman guide Prim was on the road with us in Central Asia, exploring the Mountain Kingdoms of Kyrgyzstan between Tashkent and Bishkek. This is a region famed for its hospitality, and the semi-nomadic people who live here will host the group as they journey through the rugged, mountainous landscape.

Take it away, Prim! 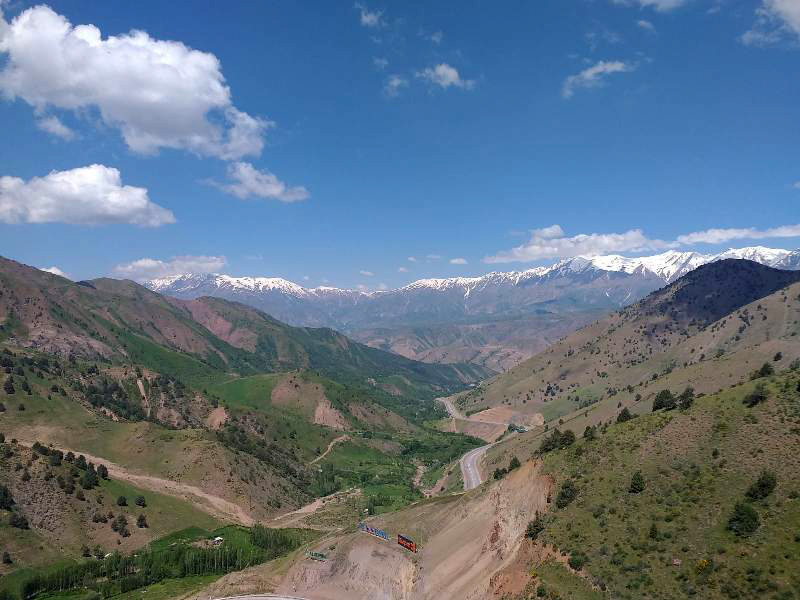 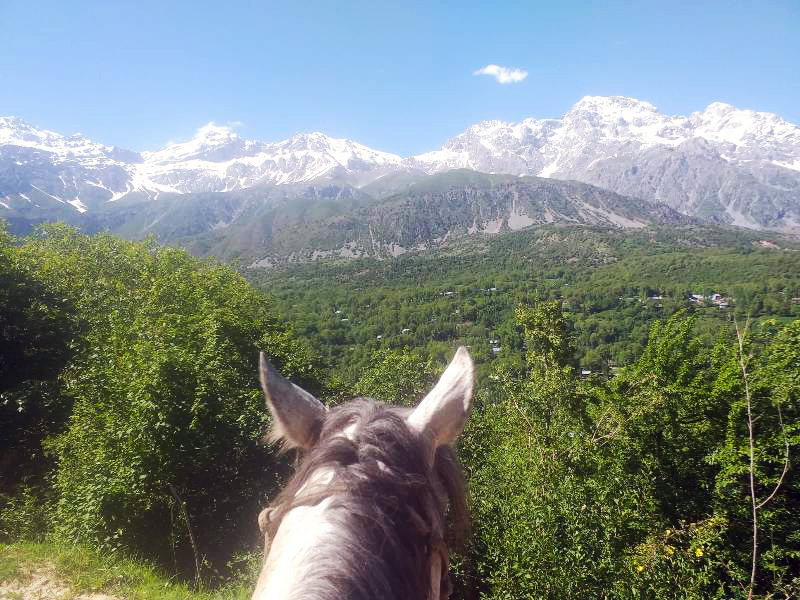 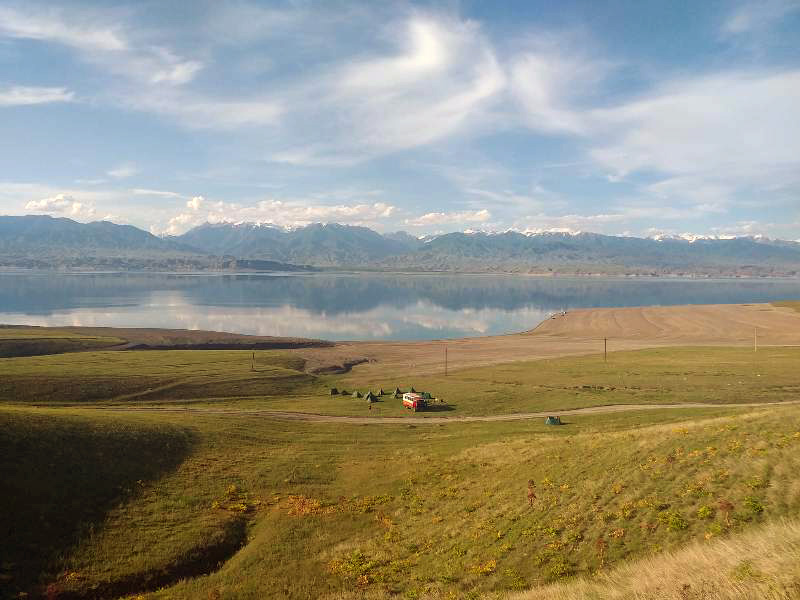 Today we left Tashkent to head over the Kamchik Pass (2270m) into the 'bread and cotton basket of Uzbekistan', the Fergana Valley.

Stopping off en route to Fergana City at the Yodgorlik Silk Factory in Margilan, we saw the silk making process from start to finish! One silkworm produces 1km of silk! 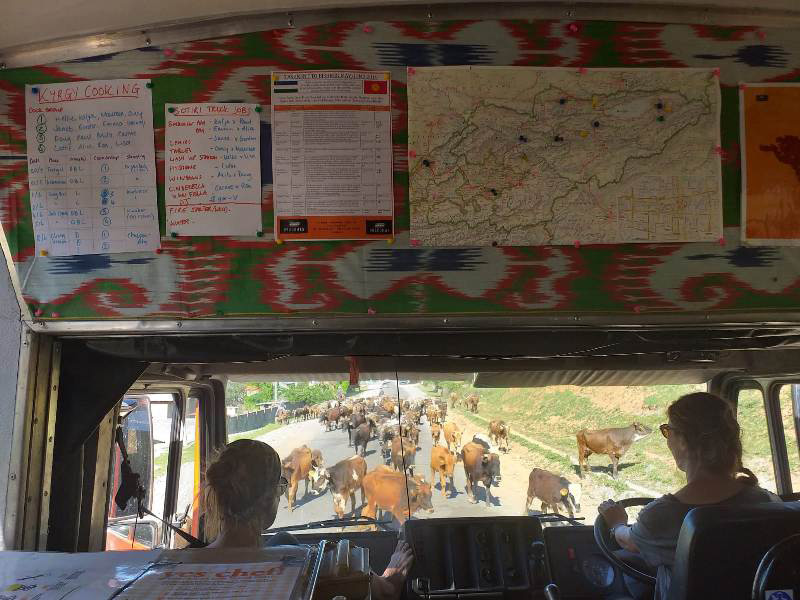 Liz and Tanja mooving cowfully through the traffic out of Arslanbob! 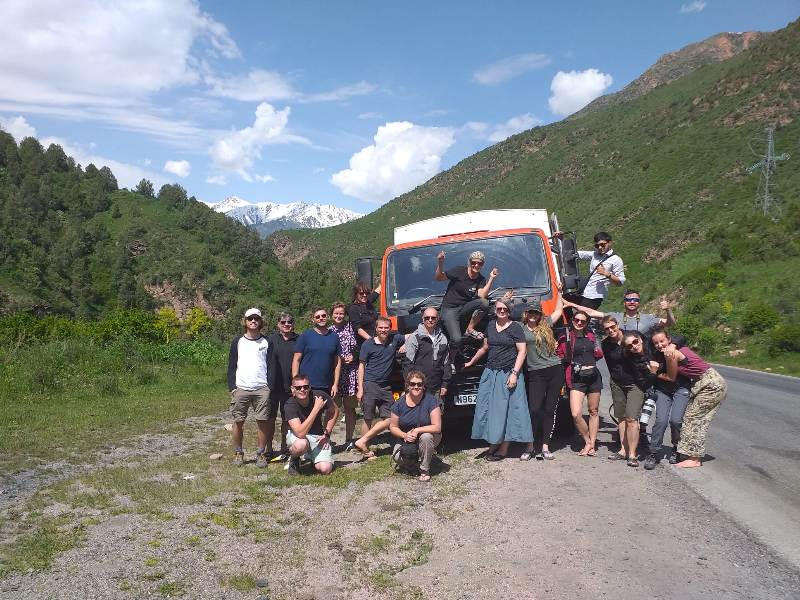 Here's all the gang. We are a 3-girl crew: Liz lead the way from Iran, through Turkemenistan and Uzbekistan, with Tanja, driver/mechanic-in-chief of our trusty truck Sortiri. I joined in Tashkent to take out-of-focus pics and make poor puns. Then there's Shahmurat, our local Kyrgyz guide, fountain of knowledge and fun. Half of the gang have been on the truck since Ashgabat, the other half have quickly got to know the ins and outs of the truck. All set for a camping-filled trip through Kyrgyzstan! 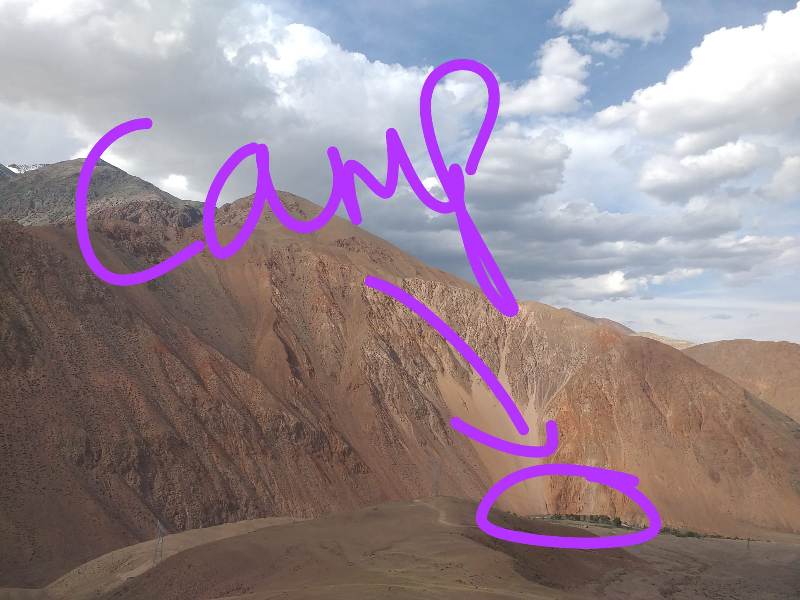 Here's Carme, aka 'Bonita', with Sweet Milo as they raise the roofseats on our way to our second bush camp - an impressive spot at the foot of red sandstone cliffs by the Kekemeren River. 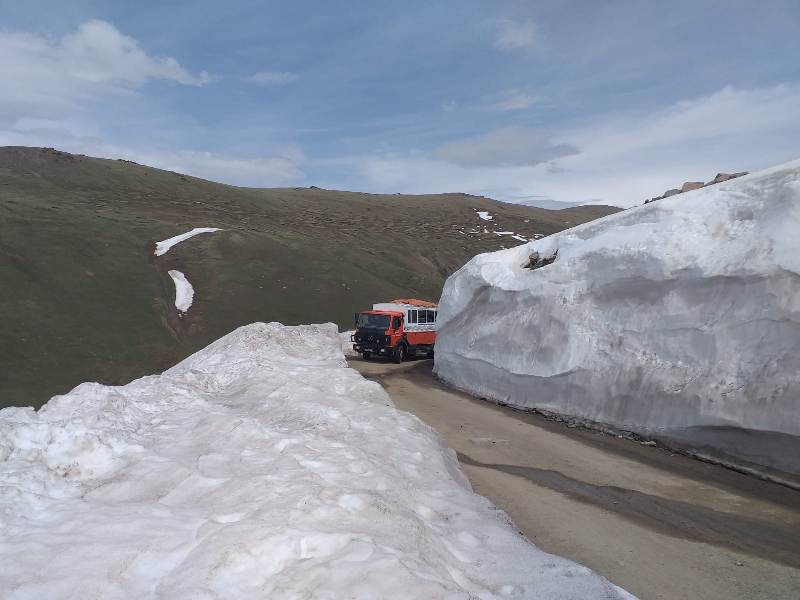 Today we make the climb up to Song Köl, an alpine lake at 3,025m. It's always an itinerary changer... there's lots of weather up here and wet ground would mean a bogging. But there was snow way we were going to miss it. 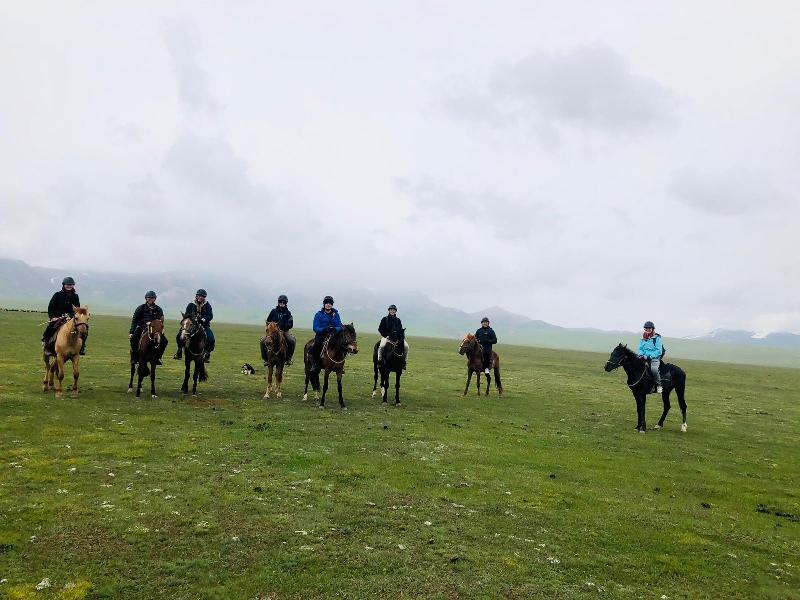 Horse-riding at Song Köl. These fab ponies make Ghengis Khan(t)s out of us. A three hour trek up into the hills and a gallop home along the lake. Best combination goes to second from the right, Paul and Carrot the Horse. 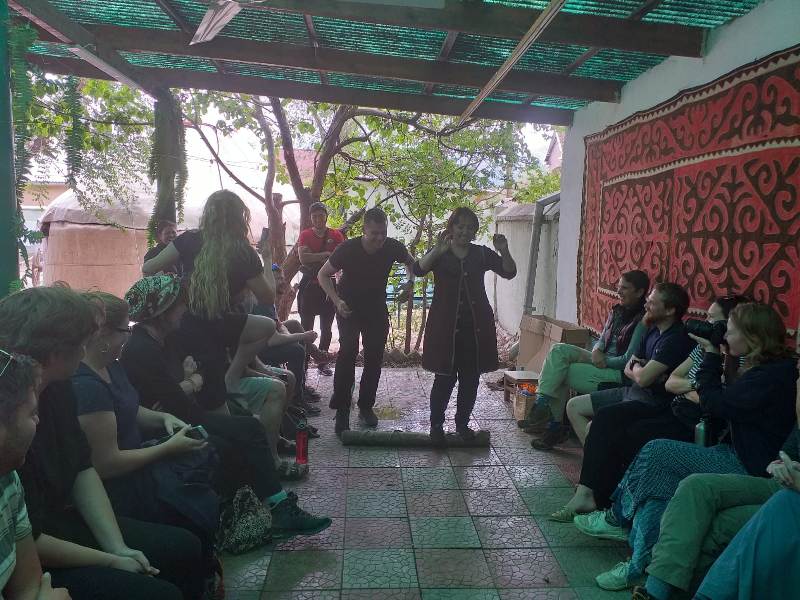 We drop down from Song Köl and get crafty in Kochkor. A women's felt making cooperative, we learn the felt-making process from start to finish. Papped with Fatima is Kyrgyzstan's in-truck DJ, DJ Har-V. He washes wool underfoot whilst breaking it down it down to some traditional Kyrgyz tunes. Perfect. 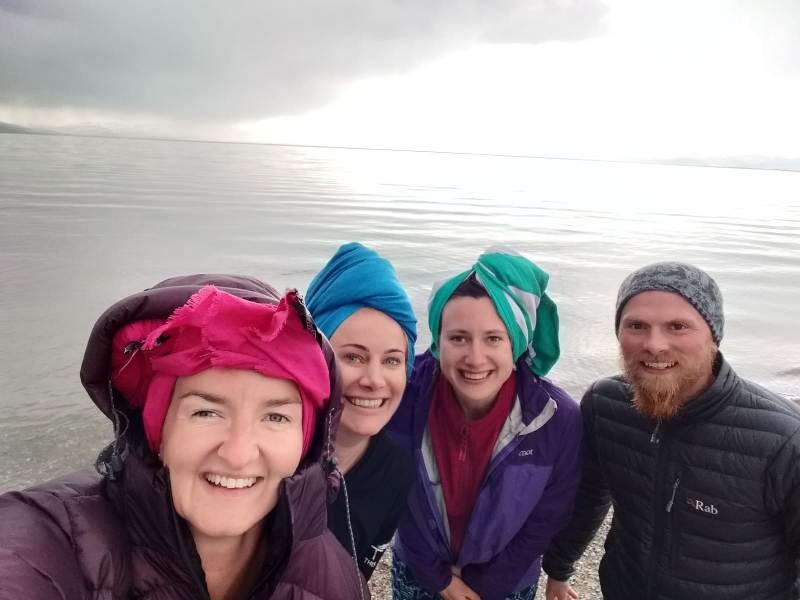 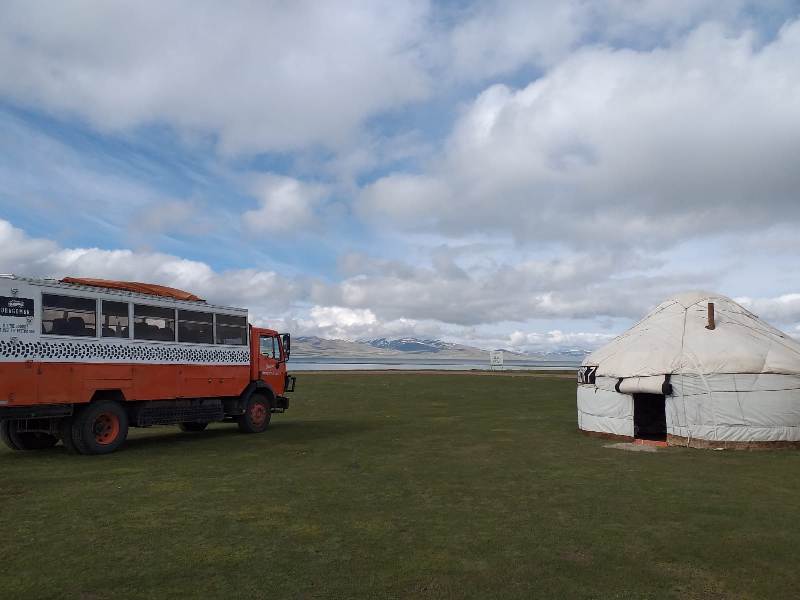 After a chilly swim we trade in the tents for a cosy yurt. Wood burner and all! 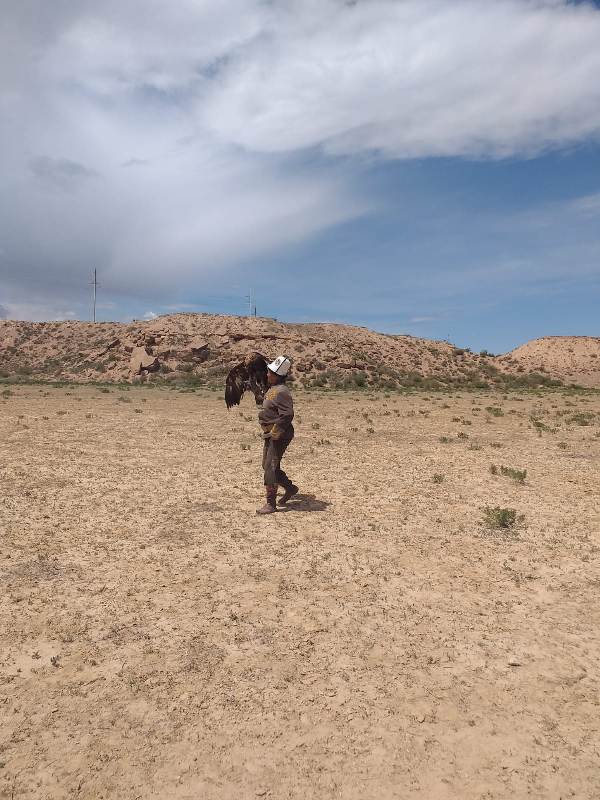 Eagle-y awaiting the falconry display from Talgart (man) and Tumar (bird). A millennia-old nomad tradition, eagles could provide food and furs for up to 20 families in a week. Now it is mainly practiced to collect furs, in competitions and to maintain the tradition. 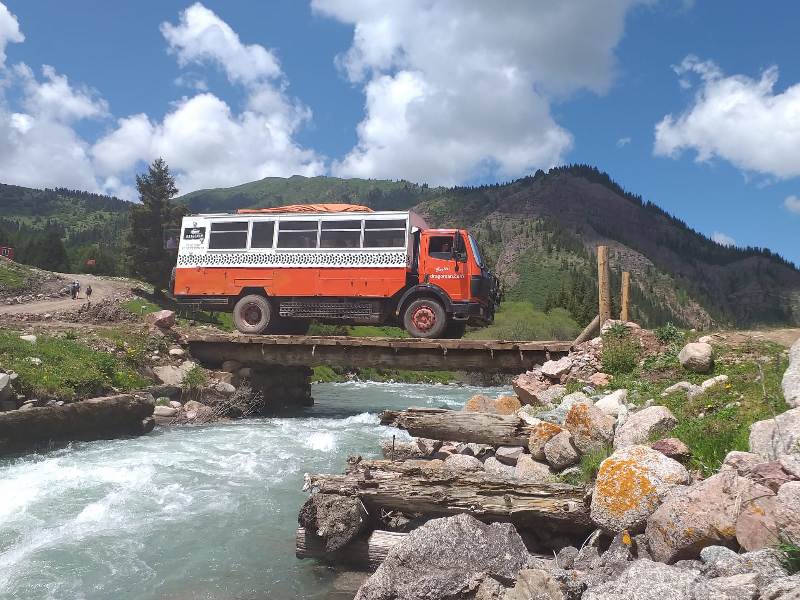 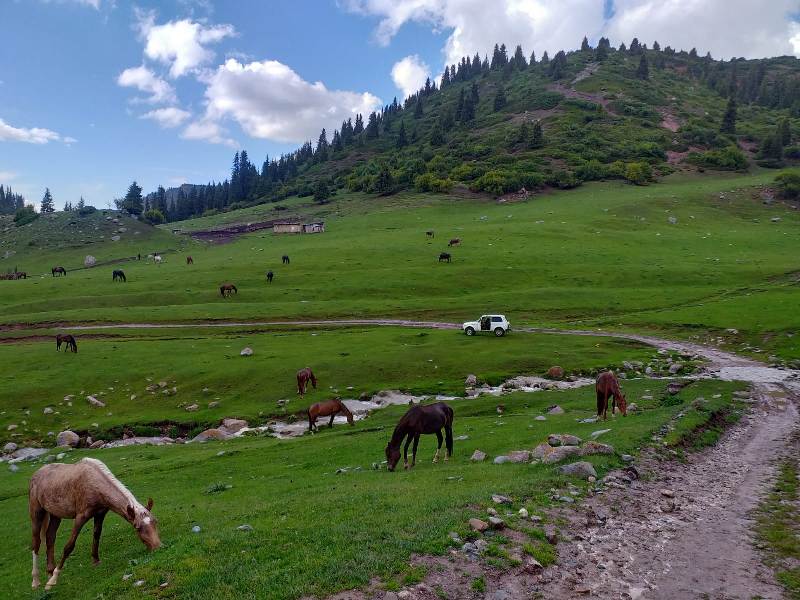 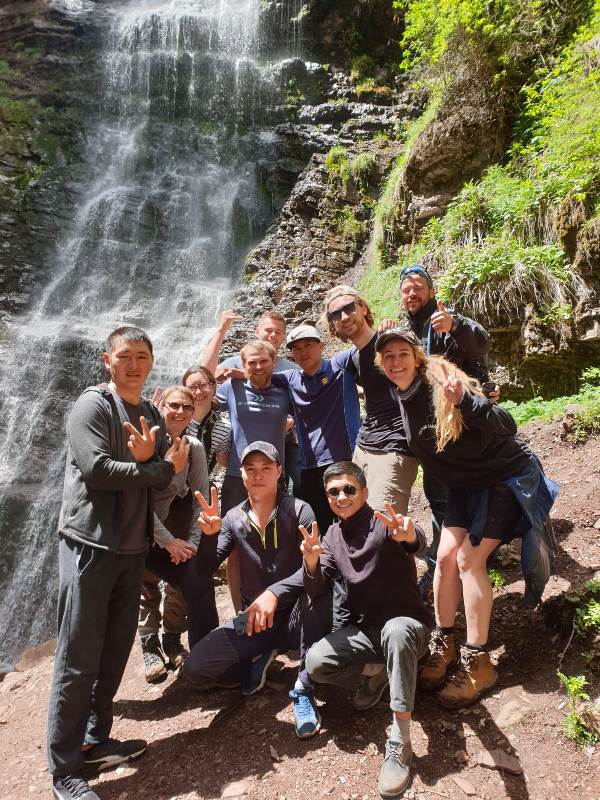 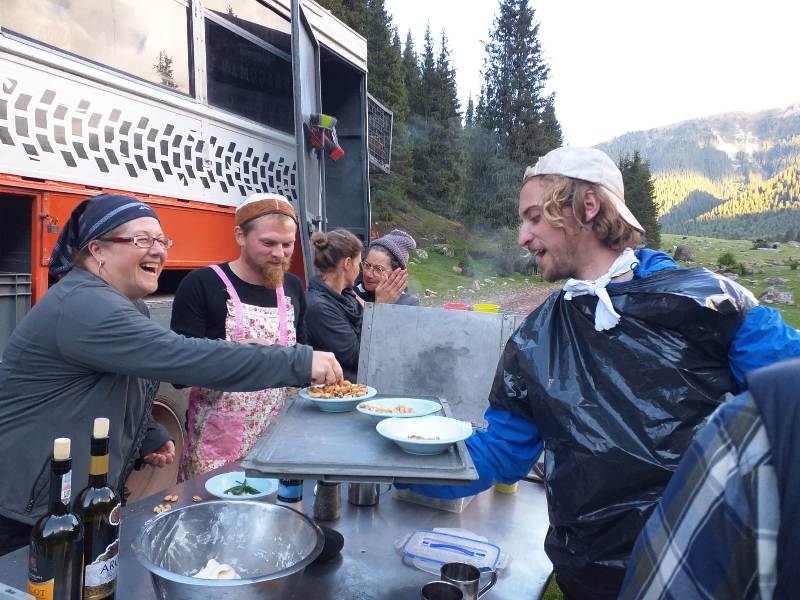 Sortiri is in fact still living large, ready and loaded for some riverside catering. For a decent feed, jobs are allocated and cook groups crack on. Here's Milo keeping the cook team sweet whilst earning some Kyrgyz pocket money.

On the menu in Jeti-Dough-Nuts is in fact head chef Douglas' very own... Doug-Nuts. Let's see how these truck treats were made! 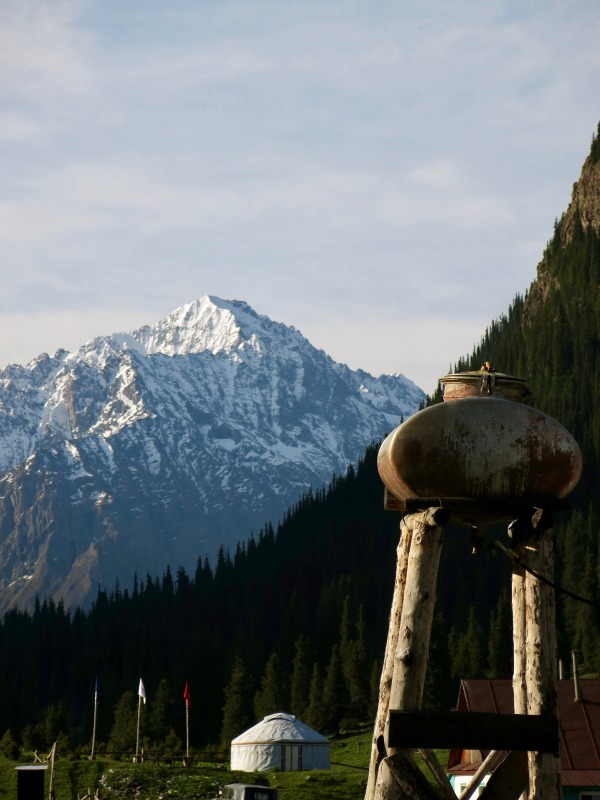 From Jeti-Oguz we drive into Karakol and take Russian military vehicles up the bumpy valley road to spend a night in Altyn Arashan, a collection of hot springs in an alpine valley. Known as the 'golden spa', the exterior of the pools may be more Soviet concrete than precious metal but the hot sulphurous pools are said to cure all sorts of ailments.

A walk up the valley and you've got views over the 5,020m Pit Palatka Peak-ed too soon on the fancy snaps and will have to credit Doug for the photos. 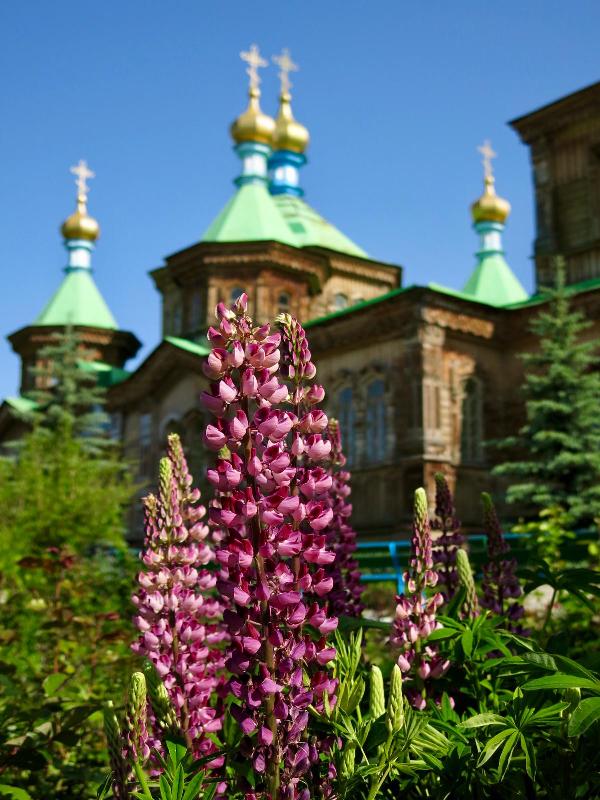 We rejoin the truck back in Karakol, the fourth largest city in Kyrgyzstan and home to the beautiful wooden Holy Trinity Russian Orthodox Church. 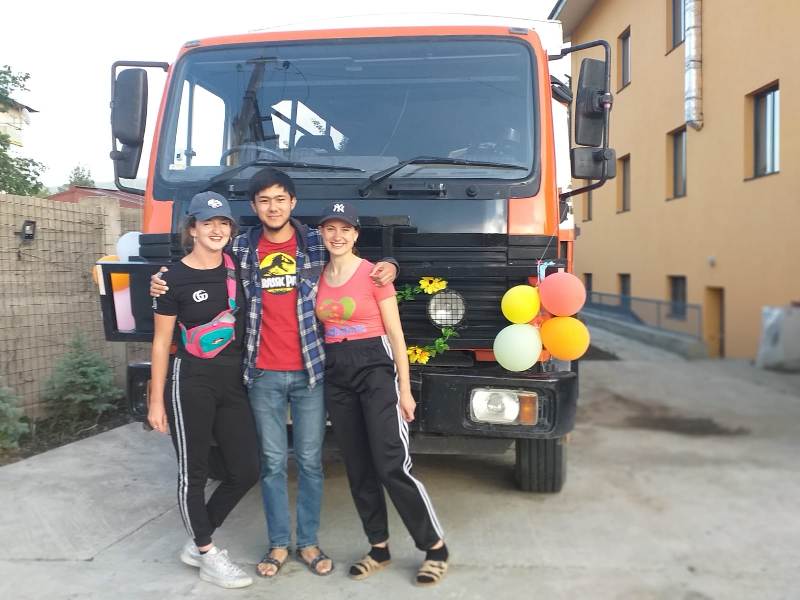 This was also a very special day...Shark's birthday! He missed the memo and didn't come dressed as himself. The Adidas-ity!